Interactions between single molecules profoundly depend on their mutual three-dimensional orientation to each other. Recently, we demonstrated a technique that allows the orientation determination of single dipole emitters using a polarization-resolved distribution of fluorescence into several detection channels. As t 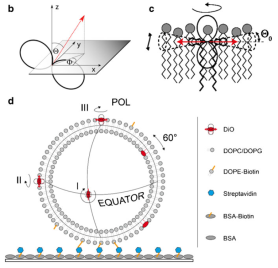 he method is based on the detection of single photons, it additionally allows for performing fluorescence correlation spectroscopy (FCS) as well as dynamical anisotropy measurements thereby providing access to fast orientational dynamics down to the nanosecond time scale. The 3D orientation is particularly interesting in non-isotropic environments such as lipid membranes, which are of great importance in biology. We used giant unilamellar vesicles (GUVs) labeled with fluorescent dyes down to a single molecule concentration as a model system for both, assessing the robustness of the orientation determination at different timescales and quantifying the associated errors. The vesicles provide a well-defined spherical surface, thus, the in cooperation of lipid dyes (DiO) represents a a wide range of dipole orientations. To complement our experimental data, we performed Monte Carlo simulations of the rotational dynamics of dipoles incorporated into lipid membranes. Our study offers a comprehensive view on the dye orientation behavior in a lipid membrane with high spatiotemporal resolution representing a six-dimensional fluorescence detection approach.