Single-particle tracking is an important technique in the life sciences to understand the kinetics of biomolecules. The analysis of apparent diffusion coefficients in vivo, for example, enables researchers to determine whether biomolecules are moving alone, as part of a larger complex, or are bound to large cellular components such as the membrane or chromosomal DNA. A remaining challenge has been to retrieve quantitative kinetic models, especially for molecules that rapidly switch between different diffusional states. Here, we present analytical diffusion distribution analysis (anaDDA), a framework that allows for extracting transition rates from distributions of apparent diffusion coefficients calculated from short trajectories that feature less than 10 localizations per track. Under the assumption that the system is Markovian and diffusion is purely Brownian, we show that theoretically predicted distributions accurately match simulated distributions and that anaDDA outperforms existing methods to retrieve kinetics, especially in the fast regime of 0.1–10 transitions per imaging frame. AnaDDA does account for the effects of confinement and tracking window boundaries. Furthermore, we added the option to perform global fitting of data acquired at different frame times to allow complex models with multiple states to be fitted confidently. Previously, we have started to develop anaDDA to investigate the target search of CRISPR-Cas complexes. In this work, we have optimized the algorithms and reanalyzed experimental data of DNA polymerase I diffusing in live Escherichia coli. We found that long-lived DNA interaction by DNA polymerase are more abundant upon DNA damage, suggesting roles in DNA repair. We further revealed and quantified fast DNA probing interactions that last shorter than 10 ms. AnaDDA pushes the boundaries of the timescale of interactions that can be probed with single-particle tracking and is a mathematically rigorous framework that can be further expanded to extract detailed information about the behavior of biomolecules in living cells. 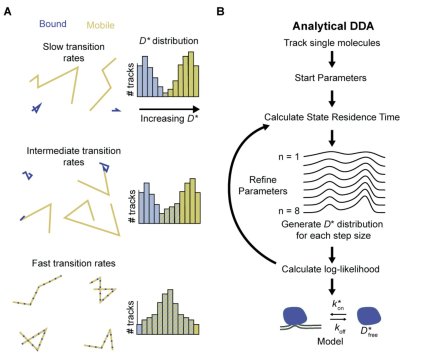